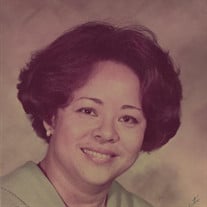 Ada Brinas,83, of Palm Beach, passed away on January 28, 2021. She was born on June 30, 1937 in Havan, to parents Eusebio and Angelica Armentero. She was the daughter of three children, she had a sister and a brother. Her brother passed away some years earlier, she is survived by her son, Francisco A. Planes and her sister, Ms. Nilda Briñas Armenteros of Cuba. Ada was a Teacher and a Student at the Escuela Normal de Monjas - Normal School for Nuns. She became a school teacher in Cuba at the early age of 18 years old. She later met and married Mr. Francisco Planes Cueto, from Guanabacoa, Cuba. They had their son, Francisco A. Planes in June 1968. She immigrated in 1971 to the United States with her son. In the United States she settled down in Washington Heights, New York City and worked to support herself and her child. Ada matriculated at the City College of the City University of New York, CCNY “School of Education” and graduated with a Master in Arts on June 5th 1975. She became a New York City School Teacher and was a School Teacher of Early Childhood and English as a Second Language children in the South Bronx, for more than 30 years. Upon retirement, moved from New York City to relocate into South Florida. She was a member of the Pregones Theater Executive Board in the South Bronx. She was a member of the Hispanic Educators Association in District 7 in the South Bronx. When she moved to Florida she became a member of the Mandel Library Litterary Club “Friends of the Mandel Library” - where she would participate in Book Reviews and or Group Meetings at the Mandel Library. Reading was one of her most sacred passions. She loved to travel and when she was younger, did so often. "Mami, we all love you very much. Rest In Peace and I will miss you very much." In Lieu of Flowers donations can be made to St Jude Children Research Hospital, 501 St. Jude Place Memphis, TN 38105 USA / [email protected] or American Cancer Society, https://donate3.cancer.org

Ada Brinas,83, of Palm Beach, passed away on January 28, 2021. She was born on June 30, 1937 in Havan, to parents Eusebio and Angelica Armentero. She was the daughter of three children, she had a sister and a brother. Her brother passed away... View Obituary & Service Information

The family of Ada Brinas created this Life Tributes page to make it easy to share your memories.

Send flowers to the Brinas family.