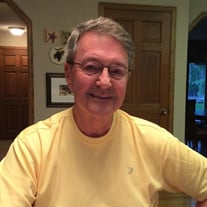 Bruce Edward Hilden, 80, of Lake Worth, Florida, passed away unexpectedly on December 14, 2020. Bruce was born in Laurium, Michigan to Waino and Margaret (Dabio) Hilden on July 18, 1940. He graduated from Calumet High School in 1958. After high school, he attended the University of Michigan’s surveying school and spent several years working on lower Michigan’s highway system. He went on to earn an accounting degree from Michigan Technological University and moved to Minneapolis in the early 70’s. He retired in 2006, after a successful career with Beryl Corporation in Minneapolis and moved to Lake Worth, Florida in 2015. Bruce is preceded in death by a daughter, Kristen, his parents, Waino and Margaret, and sisters, Gail Davidson and Sandra Grisham. Bruce is survived by his daughter Vickie Carcaise and son Jason Hilden, his son-in-law, Michael Carcaise, grandchildren Amiee and her husband Jason Hawkins, Allison Carcaise, and Michael Carcaise and his wife, Kathryn Snider, great-grandchildren, Sophie and Sallie Hawkins and Charles Carcaise, and sisters, Wanda Walters and Loretta King. Bruce was a loving and devoted father to Vickie and Jason. He was a great friend to many, including life-long buddies, Bill Wheeler, George Ecola and Bob “Jocko” Harrison. He was a champion for the underdog, always ready with a $5 bill for someone that needed it more than he did. He lived his life with integrity, grace, and a mind-set to persevere no matter the challenge. Private services for immediate family only. In lieu of flowers, donations to Feeding South Florida requested. (www.feedingsouthflorida.org)

Bruce Edward Hilden, 80, of Lake Worth, Florida, passed away unexpectedly on December 14, 2020. Bruce was born in Laurium, Michigan to Waino and Margaret (Dabio) Hilden on July 18, 1940. He graduated from Calumet High School in 1958. After... View Obituary & Service Information

The family of Bruce Edward Hilden created this Life Tributes page to make it easy to share your memories.

Bruce Edward Hilden, 80, of Lake Worth, Florida, passed away...

Send flowers to the Hilden family.