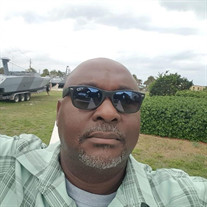 Devon St. Aubyn Campbell was born on December 28, 1965 in Elderslie, St. Elizabeth, Jamaica to George and Gilda Chambers. He journeyed to the United States at the tender age of nine and ultimately became a proud citizen. After having lived in Belle Glade, George and Gilda moved the family to Boynton Beach where Devon attended Santaluces High School and was a part of the first graduating class of 1984. After graduation, Devon started working at Kmart in June of 1984, at which time Rosa had just started working in March. Having known of, seen each other around school and having mutual friends Devon and Rosa had never formally met. If you ever asked the question of “who pursued who?” Devon’s answer would be , “Rose chased me!” .One day after a much back and forth conversation from Rosa demanding an answer of their relationship status, Devon’s final response was “fine we together then” and that day October 17, 1984 they were officially boyfriend and girlfriend. Four years later, they welcomed their first child Valoria and five years later March 13, 1993 they became husband and wife. Devon and Rosa, purchased their first home together and moved to Lantana where they went on to have children, Devin, Shiloh and Aubyn. Waste Management employed Devon for twenty-four years as a truck driver where he was a great role model and mentor for many. His home away from home in his words “MY truck” was something he was so very proud of and loved. Devon was a lover of sports, especially football. His favorite teams included the Dallas Cowboys and the Florida State Seminoles. Devon was a devoted and serving member of Love and Unity Fellowship Inc., West Palm Beach and Light of Hope Fellowship, Belle Glade. To have known Devon, you would have to say you know Jesus! His favorite scripture was John 3:16, “For God so loved the world that He gave His only begotten Son, that whosoever believes in Him should not perish but have everlasting life.” He stood on this scripture and would always refer to himself as “the whosoever”. On August 26, his earthly fight was over and he transitioned into his forever home. Though greatly missed, he leaves to cherish his memories to his devoted, loving life partner and wife of 36 years Rosa; children: Valoria (Willie), Devin, Shiloh and Aubyn; parents: George and Gilda; three sisters: Esmie, Ingrid and Doresa (Maurice); two brothers: Cecil (Keisha) and Gregory (Trisha); precious granddaughters: Malia and Aniah; Godchildren: Temekka Williams, Michael Walton Jr., Courtney Maldonaldo, Jalyna Wilson, Dominique Lester; Special friends of 36 years: Michael Sr. and Ester Walton; Childhood “Muck City” friend Marvin “Merk” Greenwich and a host of loving nieces, nephews, family and friends. Preceded in death by one nephew Michael and Mother-In-Law Juana. To ensure the health and safety of our community, we are following all guidelines set by local, state and CDC officials. If you are planning on attending a service, please contact the family in advance, so that they can plan accordingly

Devon St. Aubyn Campbell was born on December 28, 1965 in Elderslie, St. Elizabeth, Jamaica to George and Gilda Chambers. He journeyed to the United States at the tender age of nine and ultimately became a proud citizen. After having lived... View Obituary & Service Information

The family of Devon St Aubyn Campbell created this Life Tributes page to make it easy to share your memories.

Send flowers to the Campbell family.