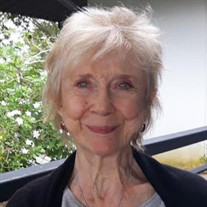 Johanna (nèe Jean) Elizabeth Hjorth, 93, born 4/5/1928 in Michigan, passed peacefully the evening of June 17th, 2021. Trustbridge provided wonderful hospice care during her struggle with cancer. Husband Marvin Minzer was constantly by her side. She is also survived by daughter, Christine Faith, step-daughter Teddi Minzer-Oster, and three siblings in the Pacific Northwest. Her parents, Olaf (of Bergen, Norway) & Margaret, encouraged her innate talents during “Jean’s teens”, with piano & voice lessons. In the late 50’s, by then in Portland, Oregon after her divorce from Christine’s father, she dedicated herself to singing and performing while working in advertising. With professional considerations, she took the Norwegian spelling of her name, after her aunt. In 1961, a scholarship brought her to Europe. After 3 years, studies and auditions for operatic roles proved challenging while also raising Chrissy. She went back to the ad business, moving to San Francisco in 1965. A perfect place for her artistic expression, she gigged regularly and took up painting. In 1987 a career move to New York reunited her with Chrissy, by then an established professional singer there. Johanna worked for Billboard Publications, then met Marvin Minzer, whom she married in 1999. They lived in Hackensack, NJ, moving to Lake Worth, FL in 2003 where she continued to sing in many musical shows in their Bellaggio Community. Her joie de vivre and generosity touched everyone she knew. There are no plans for a memorial service in Florida at this time. A Celebration of Johanna’s Life is planned for this fall, in her beloved Bay Area. Your memories are appreciated: please post!

The family of Johanna E. Hjorth created this Life Tributes page to make it easy to share your memories.

Send flowers to the Hjorth family.