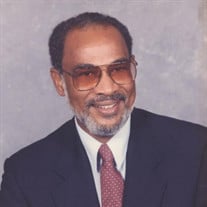 Lennox Burke Mangaroo Sr. was born in Kingston, Jamaica on January 15, 1944. The son of Hazel and Sydney, Lennox was raised in St. Ann by his Grandmother, Ms. McKenzie or Mama as she was affectionately known. Lennox attended Bamboo Primary School in St. Ann and graduated from the College of Arts Science and Technology in Kingston, Jamaica. Lennox gave his life to the Lord at age 17 and had a passion for Christ. He attended Hope Gospel Assembly where he met the Love of his life Loris May Smythe. Lennox and Loris courted for a short period and married in June of 1967. They welcomed their first child in March of 1968, a son, Novelle. Because of His love for Jesus and his desire to make a better life for himself and his family, he decided to relocate to the United States. When he arrived in the US, Lennox attended Rets Electrical College and earned his electrical certificate. He worked for a short while as an electrical installer. Always striving to improve, Lennox secured a job at Singer Kearfott in November 1969 as a financial analyst and a program manager. As his passion for Christ deepened, he made contact with Renel and Verone Small, Roy and Cisilyn Ellington, and Lorna DeLeon and started a vocation in the Bronx, which today is Olivet Gospel Church. In May of 1971, Lennox and Loris welcomed their second child, a son they named Robert. In October of 1972 they welcomed their 3rd child, yet another son they named Lennox Jr. Not satisfied with the status quo, Lennox went back to school and received his Bachelors of Science degree in Business Administration and American Studies from Ramapo College of New Jersey in May of 1981. Lennox was very active at Olivet Gospel Church and spent most of his time managing all aspects of the church’s business affairs. He was an Elder and served the church faithfully for over 50 years. At one point or another, he did it all. Sang in the Choir, Camp Committee, Sunday School Outing Chairman, Church Outing Coordinator, Usher, Preacher, General Contractor, Carpenter, Electrician, Plumber, cook and the list could go on and on. Lennox’s true passions in life were easy to identify. He loved the Lord, his wife, family, and people. He was a man of his word and would help anyone and everyone whether you asked or not. He was not ashamed of his relationship with Jesus and everyone who knew him knew it. Lennox retired from Singer Kearfott in September 2017. As time began to catch up with him, and after years of nagging and prodding from his children and grandchildren, he finally decided to relocate to Florida or “that place” as he always referred to it. Lennox was diagnosed with Parkinson’s and Alzheimer’s and ultimately succumbed to the effects of each disease. He went home to be with the Lord on Thursday afternoon, December 3, 2020. Lennox was truly loved by all who came in contact with him. If you met him, you knew there was something different about him. His true passion and love for Jesus showed in everything he did. He was a light in a dark world. If you knew him, you loved him! He will be sorely be missed by all! Lennox is survived by Loris, his wife of 53 years. His sons Novelle (Tracey), Robert (Maria) and Lennox Jr. (Nicole). His grandchildren Novelle Branden, Kayla, Justin, Brianna, Jaylyn, Ethan and Collin. His sisters Allison and Meera, his brother Lloyd, and a host of in-laws, cousins, nieces, nephews, friends and church family.

Lennox Burke Mangaroo Sr. was born in Kingston, Jamaica on January 15, 1944. The son of Hazel and Sydney, Lennox was raised in St. Ann by his Grandmother, Ms. McKenzie or Mama as she was affectionately known. Lennox attended Bamboo Primary School... View Obituary & Service Information

Send flowers to the Mangaroo family.