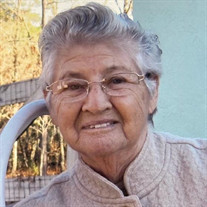 Lilla Helbig (Martinez) of Boynton Beach passed away peacefully from old age with help from the virus on her 90th birthday, August 13, 2020. Like so many lost, she was much more than a statistic. Born in Queens, New York in 1930 to Antolin & Rose Martinez, she spent her childhood in Connecticut and the Bronx, New York. Her Cuban father moved the family back to Cuba for a memorable year when she was 5 yrs old before returning to the U.S. She graduated from Bronx Vocational High School in 1950. Mutual friends in Flushing, New York introduced Lilla to her husband Anthony James Helbig. After marrying in 1956, her life from then on was devoted entirely to him and their three children. Lacking some domestic skills, she learned to cook from her Italian mother-in-law, Mary Seminaro Helbig, which in turn led to a lifelong love of cooking. Lilla enjoyed decorating the house for holidays, especially Christmas, and will be remembered for great family dinners and holiday celebrations. Mostly, she will be remembered for her sweet disposition, beautiful smile, and willingness to help those she saw in need. She enjoyed watching sports with her husband Jim and took up the game of golf at age 65 just to keep him company on the course. She loved the outdoors. Even during the hot Florida summers, she could usually be found sitting in the shade of her backyard listening to her CD player. She liked Latin music and, inexplicably for a girl from the Bronx, country music. She appreciated sunsets, moonlit nights, clouds, and travel. Understanding the value of exercise, she was a constant presence in her Boynton Beach neighborhood & at the local park. She was proud of her 3 mile daily walks 5 days a week for many years: first under her own power, then with trekking poles, next her cane, and finally her rolling walker. She made a great life at home for her family, and her three children will be forever grateful for their memorable childhood. Her giving carried over into the next generation and she will be sorely missed by her grandchildren. She is survived by her brother Anthony Martinez of Commack, NY; her three children: Paul Helbig and wife Becky of Ocala, FL, Linda Lovatt of Delray Beach, Doris Helbig of Boynton Beach; her six grandchildren; Timothy Kruetzkamp and Tabitha Kirby of Shawnee, KS, Kevin Kruetzkamp of Overland Park, KS, Michael Kruetzkamp of Shawnee, KS, Christina and Shawn Duesling of Ocala, FL, Patrick Helbig and Briana Durso of Ocala, FL, Matthew and Savana Helbig of Ocala, FL; her eight great grandchildren: Christopher, Daniel, and LilyAnne Duesling, Talia and Mya Helbig, Amelia and Walter Helbig, Ty Kruetzkamp. Lilla was predeceased by her parents, Jim her husband of 54 years, and sisters Ligia Aviles and Ruth McLean. A celebration of life is planned for a future date. Donations in the name of Lilla Helbig can be made to the charity of your choice. To express condolences and leave memories, visit palmbeachmemorial.com at the obituaries tab and palmbeachpost.com/obituaries. Palm Beach Memorial 3691 Seacrest Boulevard Lantana, FL 33462 561-586-1237

Lilla Helbig (Martinez) of Boynton Beach passed away peacefully from old age with help from the virus on her 90th birthday, August 13, 2020. Like so many lost, she was much more than a statistic. Born in Queens, New York in 1930 to Antolin... View Obituary & Service Information

The family of Lilla Helbig created this Life Tributes page to make it easy to share your memories.

Send flowers to the Helbig family.