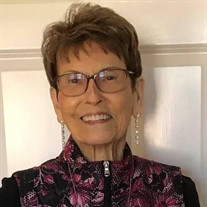 Martha Hutcherson Cochran, 91, went to be with the Lord on Monday, April 12, 2021, in her home in Greensboro, GA. Martha was born on January 28, 1930, in Berea, KY, and was the daughter of William Robert Hutcherson and Sally May Grainger. Martha met the love of her life, Gene, in 1948 on the tennis courts at the University of Florida; that’s where their love story began. They married in 1952 and had 65 wonderful years together. They had four children – Donna, Sharon, Bob, and Marcia – and tennis became an important fabric of the Cochran family. Martha went on to become one of the top tennis players in Boca Raton, FL, for 7 years, and she was ranked #4 in the state of Florida. She and Gene were avid motorcycle enthusiasts, and one of their most notable trips was when they rode to Alaska and back in 1991; they traveled 15,000 miles in 62 days. They traveled by motorcycle to every state in the Union (except Hawaii) and all the provinces in Canada. Academics and fitness had always been Martha’s passions. She began her collegiate career at Oberlin College, Ohio (Freshman yr), Northwestern State, LA (Sophomore yr) where she played on the all-star basketball, volleyball, and softball teams. She eventually transferred to the University of Florida and completed her bachelor’s degree in mathematics (Cum Laude) and physical education. Her academic success even dated back to her high school days where she was the valedictorian of her graduating class of 1947 at Berea Foundation High School. After graduating college, she taught 8th-grade math and PE in Tampa, FL. Martha was very active in her community, as she was a member of St. Gregory’s Episcopal Church and the Chapel of St. Andrew Episcopal Church where she served on St. Andrews Auxiliary Guild for decades. In 2016, Martha joined the hospitality team at The Episcopal Church of the Redeemer and was blessed by unlimited love and encouragement. Martha dedicated her life to God and family; she was known as the most loving wife, mother, and grandmother. She was preceded in death by her husband Eugene Culpepper Cochran and sister Sarah Hutcherson Wing. She is survived by her brother W. R. Hutcherson,Jr. (Vittie) of Sacramento, CA; four children: Donna Lynn Cochran McNaughton (Ron) of Johns Creek, GA; Sharon Cochran Gorman (Joe) of Greensboro, GA; Marcia Cochran Kulterman (Ron) of Austin, TX; and Robert Ward Cochran (Ruby) of Coppell, TX; seven grandchildren: Christopher Kulterman, Lindsay Kulterman, William Gorman, Russell Gorman, Julie Gorman Kramer, Jennifer McNaughton, Lori McNaughton Matthews and seven great-grandchildren: Carli Kennedy, Kylie Kramer, Christopher Matthews, Jacob Matthews, Smith Gorman, and Harrison Gorman. Funeral services will be Sunday, May 23, 2021 at 10 a.m. at Palm Beach Memorial Park (3691 North Seacrest Blvd. Lantana, FL 33462). The burial will follow immediately after the chapel service. To ensure the health and safety of our community, we are following all guidelines set by local, state and CDC officials. If you are planning on attending a service, please contact the family in advance, so that they can plan accordingly. In lieu of flowers, please donate to one or more of the following: The Episcopal Church of the Redeemer (P.O. Box 93, Greensboro, GA 30642) St. Mary’s Good Samaritan Foundation (1230 Baxter Street, Athens GA 30606) Chapel of St. Andrew (3900 Jog Road, Building 13, Boca Raton, FL 33434)

Martha Hutcherson Cochran, 91, went to be with the Lord on Monday, April 12, 2021, in her home in Greensboro, GA. Martha was born on January 28, 1930, in Berea, KY, and was the daughter of William Robert Hutcherson and Sally May Grainger. Martha... View Obituary & Service Information

The family of Martha Hutcherson Cochran created this Life Tributes page to make it easy to share your memories.

Martha Hutcherson Cochran, 91, went to be with the Lord on Monday,...

Send flowers to the Cochran family.