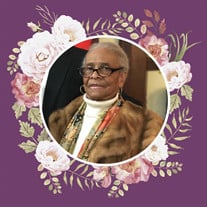 Reminiscing Mavis Pearl Jones passed away on December 15, 2020, at the age of 90. Mavis was born February 1st, 1930 in Ginger Hill, St. Elizabeth Jamaica, W.I. She was the baby of ten children and the last surviving child of T.C. and Ira Jones. She attended Ginger Hill Primary School before moving on to Windsor High School in Kingston, Jamaica. In 1958, Mavis moved to London, England taking her two children. There she met her partner Kenneth Bryd, who sadly passed in the early 1970’s. She also made two special friends Louisa and Vivia, Louisa also passed away in the early 1990’s and Vivia, most recently on December 16, 2020. She attended night school to learn shorthand and typing while working for The Ferguson Radio Corporation. Eventually she moved to Brooklyn, New York in 1970, where she made her permanent home. Here, she served her community as a school crossing guard for Mahalia Jackson- I.S. 391. She found her life’s calling as a certified nurse’s aide working at Prospect Park Nursing Home where she made many friends. She was a devoted and caring to the residents in her charge At the age of 73, Mavis retired so she could help take care of her first great grandchild, Aaron. She was overjoyed that she was alive to see a great-grandchild! Mavis is survived by her son, Clifford and wife Pat; daughter, Orchid and husband Charles; grandchildren, Amanda, Tashna, Nadine, Roland, Tia, Tammie, and Kenjela; ten great-grandchildren, Aaron, Amber, Anakin, Ashlee, Aniya, Autumn, Roderick, Ava, Tori, and Aria; countless nieces, nephews, cousins and two sisters in law, Pamela and Blossom. She is predeceased by her brothers: Justin, Winston, Bertie, Brother, Hector, Nigel, Wesley, Mervin; her sister Linnie, and grandson Romie. Known as Nanny, Mavis lived on Brooklyn Ave, for over 40 years and was loved by everyone. She took pride and delight in cooking for those who graced her path. She cherished her family and enjoyed being around her grand and great-grandchildren. Nanny was the epitome of an independent woman. She will be greatly missed.

Reminiscing Mavis Pearl Jones passed away on December 15, 2020, at the age of 90. Mavis was born February 1st, 1930 in Ginger Hill, St. Elizabeth Jamaica, W.I. She was the baby of ten children and the last surviving child of T.C. and Ira Jones.... View Obituary & Service Information

The family of Mavis Pearl Jones created this Life Tributes page to make it easy to share your memories.

Send flowers to the Jones family.