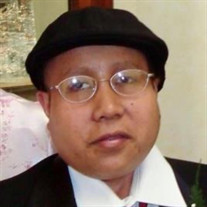 In the early morning hours of October 10, 2021, Michael Qiu passed away in West Palm Beach, Florida at 41 years young. He was known to his family simply as “Unky Mike”, an accidental nickname given to him by his beloved eldest niece, Ping Ping. He often referred to himself as “Unky Mike” to his family as he had fallen in love with the adoring name. He was also given the nickname “Be-Be” (translation: baby) by his parents. The name “Be-Be” still echoes in the hearts of those who watched him grow up. To his mother, who called him by that name until his final moment, he will always be known as her “Be-Be.” Michael was born in China, on June 30, 1980. He was born to Tan Dai and Zi Jian Qiu. He and his family moved to the United States on December 30, 1985. Michael has resided in Palm Beach County ever since. He attended Poinciana Elementary, Lantana Middle School and later graduated from Santaluces Community High School. In 1991, at the tender age of 11, Michael was diagnosed with cancer. Although he wasn’t expected to survive, he defeated the odds time and time again and became a true inspiration to us all. He was not only a beloved son, brother, cousin, nephew, grandson, uncle, friend, but he was also a vigorous cancer fighter for over 30 years. He seldom complained about his war with cancer. He has fought countless battles and conquered too many to count, which is an accomplishment very few can achieve in their lifetime. As the oldest of three children, Michael is survived by both of his parents, his younger brother Bobby Qiu (wife, Amanda Qiu) and younger sister Sherry Qiu. Michael was a loving uncle to all six of his nieces and nephews, Devin Qiu, Mia Qiu, Darren Qiu, Ping Ping Warren, Chelsi Copeland, and Chase Copeland. He was a very hands-on uncle who often spent quality time with each and every one of them. Being an uncle became one of his most fulfilling duties. Michael often enjoyed watching all of the latest animated movies because he was always a kid at heart. One of his most impressive hobbies included him taking apart and fixing old computers. With no professional technical education background, Michael managed to teach himself the art of repairing and upcycling a wide range of electronics. Online shopping also became another one of his favorite pastimes. He especially enjoyed shopping for his nieces and nephews because it brought him the truest joy. “Unky Mike” lives on through wonderful and fond memories in the hearts and minds of his loving and devoted family and friends.

In the early morning hours of October 10, 2021, Michael Qiu passed away in West Palm Beach, Florida at 41 years young. He was known to his family simply as &#8220;Unky Mike&#8221;, an accidental nickname given to him by his beloved eldest niece,... View Obituary & Service Information

The family of Michael Qiu created this Life Tributes page to make it easy to share your memories.

Send flowers to the Qiu family.