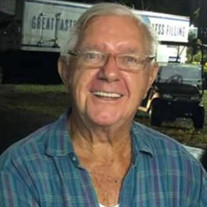 Nelson Eddy “BILL” Bruckner West Palm Beach It is with great sadness that we announce the passing of Nelson Eddy “BILL” Bruckner, age 85, on Sunday February 6, 2022. To the eternal sounds of the Glenn Miller band and to the crooners like Frank Sinatra, Nat King Cole, and Johnny Mathis; Nelson “Bill“ Bruckner, was taken upon Eagle’s wings to be with our heavenly Father and to spend eternity with his brother Jesus Christ. Dad fought a valiant fight against the Covid19 virus and he will be greatly missed by family and all those lives he touched. Nelson was born on January 6, 1937, to Walter and Minnie Bruckner. He grew up in Astoria, Queens, NY with brothers Walter, Erich, and Fred “Fritz”; all who predeceased him. Nelson (Dad & Peepa) told us stories of growing up during the Second World War; the neighborhood celebrations that occurred on VE Day and VJ Day; and helping his parents with their candy store. Nelson graduated from Queens Vocational High School in 1955. He served his country in the United States Army from 1961 to 1963 which included a one-year tour in South Korea as a Radio Operator / Signal Corp not far from the DMZ. He was an amateur speed skater and cyclist who won dozens of medals throughout the New York Tri-State area and the Northeast and Midwest regions. He loved to compete in Lake Placid, NY and Saratoga Springs, NY and travelled with family & friends: Fred Bruckner (his brother) with Josita & Bob Nau and many others. Nelson and his friends were avid race car fans and attended many races annually especially the annual Indianapolis 500. Nelson married his sweetheart, Dorothy Laudenback, of Maspeth, NY as he worked several jobs in the grocery sales and food delivery industry. They both had three children: William “Bill”; Robert and Barbara and eventually settled in Mahopac, NY. Nelson moved to Palm Beach County, FL in 1979 to work for Rinker Materials Corp. and his children soon followed him to Lake Worth in the early 1980’s. Nelson devoted himself to his children and his grandchildren and eventually his great-grandchildren. Nelson spent many hours with his grandchildren attending their sports games, recitals and various graduations, birthday parties, weddings, and travelled on family vacations. During his final hours, he was surrounded by his loving family, all of which came from near and far, to thank him for all that he brought forth in our lives and the love that he gave us. Our father was a very simple and quiet Man, yet he made everybody laugh and loved to spend time with him. He was very patriotic and very passionate about his beliefs. He will suffer no more the pain of this earthly time and he will spend eternity in heaven and a Rock for us here on earth. We love you Dad, Pops, Gramps, Peepa and we will move forward with the loving thoughts and memories of you. He is survived by his loving children: William F Bruckner (wife Lynn); Robert J Bruckner; and Barbara Ann (Bruckner) Hatcher (husband Danny); five grandchildren: Kayla (Hatcher) Palmer (husband Shawn); Lauren Bruckner; Kristin Hatcher (fiancé Haley Baraby); Erik Bruckner (fiancé Shandrel Haslam) and Zachary Bruckner; and 2 great grandchildren: Carter Robert Palmer and Everett Ayden Palmer. No funeral services will be held at his request. In lieu of flowers, donations may be made to DAV (Disabled American Veterans) or any military/veteran’s organization of your choice. He believed in “Supporting Our Troops”. A Celebration of Life will be held at a later date.

The family of Nelson Bruckner created this Life Tributes page to make it easy to share your memories.

Send flowers to the Bruckner family.