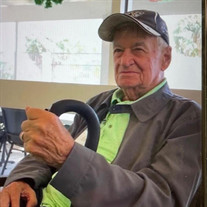 Boynton Beach— Lee Phillips, 88, passed away on April 26, 2022, at Bethesda East Hospital. Although his death was unexpected, he was at peace. Lee cherished his family and will be deeply missed. He is survived by his loving “bride” of 64 years, Carolyn Doering Phillips; his children, Mary-Jo Delorey and her husband Steve, Susan Murphy, Robert Lee Phillips III, Allison Poquette, and Karen Shilo and her husband David; his grandchildren, John Murphy Jr. and his wife Melody, Kaitlin Murphy, Meghan Henderson and her husband Dylan, Douglas Phillips, David Shilo Jr., Carter Phillips, Molly Shilo, Jessie Delorey, Kyle Delorey, and Katie Poquette; his great grandchildren, Brynleigh, Declan, and Rylee Murphy; his brothers, Elliot and Rick Phillips; many nieces, nephews, and friends; and his “granddog” Oreo. In addition to his deep love and appreciation for his family—and golf— Lee was passionate about all things related to his beloved Boston (New England) sports teams. Whether sitting at the 35 yard line in Foxboro stadium or on the parquet floor across from the Celtics bench at the old Boston Garden, Lee thoroughly enjoyed each and every game. Although he didn’t have season tickets at Fenway, he cheered enthusiastically from his recliner as the Red Sox finally broke the curse in 2004! Everyone who knew Lee will fondly remember his commitment to his “Teams”. Lee was born on April 13, 1934, in Springfield, Massachusetts, to the late Martha and Robert Phillips. He grew up here; he met his wife and started his family. He moved from western Massachusetts and worked in the food service industry as an owner and manager at Friendly Ice Cream and as functions coordinator at Boston University while raising his family in the towns of Easton and Needham. His final business venture was owning and managing The CFM (Convenient Food Mart) in Norwood, Massachusetts, where he employed all of his children at one time or another. He and Carolyn shared a home with Karen, Dave, Meghan, DJ, and Molly during those years. Many family gatherings and traditions were celebrated there. He retired to Atlantis, Florida, in 2003 where he enjoyed spending time with Carolyn and time on the golf course, playing cards and entertaining his family when they came to visit. The community he most recently called home was Boynton Beach, where he lived with Carolyn, Allison, Katie, and Oreo. As he slowed down, he enjoyed his puzzles, game shows, walks in the dog park, and family dinners. He faithfully attended St. Joseph’s Episcopal Church and embraced the love and support he received from his parish. As recently as the Monday before his passing, Lee sat on the edge of his bed and said to Carolyn, “we are so lucky to have kids that take such great care of us.” Lee truly appreciated his family; this love and deep appreciation is what we will carry in our hearts as we celebrate his life and remember him. A mass and memorial service will be held on May 12, 2022, at 10 AM in Saint Joseph’s Episcopal Church on 3300 S. Seacrest Blvd., Boynton Beach, Florida, followed by burial at Palm Beach Memorial Cemetery. The family invites you to join them for lunch after the services in the St. Joseph’s Parish Hall. Additionally, a Celebration of Life will be held in July at St. Timothy’s Parish in Westwood when the family returns to Massachusetts. Details to follow as arrangements are finalized. In lieu of flowers, donations can be made to Saint Joseph’s Episcopal Church.

Boynton Beach&#8212; Lee Phillips, 88, passed away on April 26, 2022, at Bethesda East Hospital. Although his death was unexpected, he was at peace. Lee cherished his family and will be deeply missed. He is survived by his loving &#8220;bride&#8221;... View Obituary & Service Information

The family of Robert Lee Phillips Jr. created this Life Tributes page to make it easy to share your memories.

Send flowers to the Phillips family.