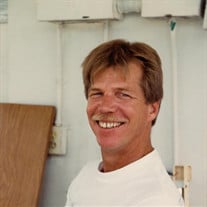 Roger Allen Hagler It is with tremendous grief that we announce the passing of Roger Allen Hagler. He left us suddenly and unexpectedly in his home on January 15th, 2022, at the young age of 65. Roger was born on February 7th, 1956, in West Palm Beach, Florida, and lived his entire life in what he professed to be the Fishing Capitol of the World, South Florida. A Lantana Legend, Roger spent the majority of his life hunting fish, whether by land or by sea, by dock or by boat. Even as a young boy, fishing was always his passion. He would camp out at the Lantana Bridge and Pier many nights just waiting for the snook to bite. He loved the thrill of hooking and fighting giant fabled fish! Few snook, flounder, redfish, grouper, sheepshead, pompano, or snapper could escape once they were hooked! This ultimately earned him the nickname, The Great White Hunter. Roger seemed to be born with an internal fish finder and if there was a way to catch them, by God, he was going to figure it out! Having spent most of his younger years outdoors fishing, hunting and camping, Roger took a job as a Survey Rodman in his late teenage years. This led to a flourishing career as a Professional Land Surveyor and Mapper where he served South Florida enthusiastically for over 40 years. For those that knew Roger, he was a fountain of wisdom in his field and there were few places in South Florida where you could go that he was not able to point out some survey marker he placed or contribution he made to its growth and development. Roger was an instrumental pioneer in the development of Wellington, Royal Palm Beach, Jupiter, Abacoa, the Florida Keys and various other communities. While many of these places were still primitive wetlands and wooded areas, he traipsed through thick underbrush and waded through swamps, slaying rattle snakes and water moccasins with his trusty machete as he staked the way for future developers, surveyors and planners. One of his largest scale projects that he was most proud of was a 5500+/- acre appraisal mapping survey of Big Pine Key for the State of Florida Land Acquisition Project (C.A.R.L.) which included multiple Mean High Water Surveys, Hydrographic Surveys and Asbuilt Surveys. Roger’s greatest passion, however, was for his two children. Nothing in this world brought him greater joy. He loved his son, Travis, and his daughter, Lacey, with all his heart. He always wanted nothing but the best for them. He shared with them both his affinity for nature, his love for the great outdoors, his knowledge of the Bible, and his calling to the sea. While they were growing up, Roger took his children on many camping and fishing adventures. He often regaled others he met in telling their family fishing tales. One of his greatest blessings in his final days was to see them both thriving and shining the way he had always envisioned them. Roger always had a huge heart for the Lord and a unique way of speaking God’s word. While we mourn his loss here on Earth, we all know he is now with his Father in Heaven. We can all take solace in the fact that we have another Angel looking after us by the Lord’s side. He leaves behind his two loving and devoted children, Travis and Lacey Hagler, as well as his beloved mother, Nancy Hagler, and three brothers, Ronald, Bill and Charles Hagler. He now joins his younger brother, Raymond, and his father, Mizell Hagler, who have long awaited his arrival in God’s rest. In lieu of flowers, Roger would’ve wanted everyone to take a child fishing in his memory. His family also feels this would be the best way to honor his memory. His funeral service will be held in the Chapel at Palm Beach Memorial Park on February 13th at 11 AM. Services are as follow Palm Beach Memorial Park Funeral Home 3691 Seacrest Boulevard Lantana, FL 33462 Sunday February 13,2022 Memorial Service 11:00am - 12:00pm

Roger Allen Hagler It is with tremendous grief that we announce the passing of Roger Allen Hagler. He left us suddenly and unexpectedly in his home on January 15th, 2022, at the young age of 65. Roger was born on February 7th, 1956, in West... View Obituary & Service Information

The family of Roger Allen Hagler created this Life Tributes page to make it easy to share your memories.

Roger Allen Hagler
It is with tremendous grief that we announce...

Send flowers to the Hagler family.