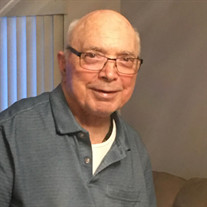 Warren George Corliss, Jr. passed away on March 31, 2022 in his home in Greenacres, FL. He was preceded in death by his wife Jill (Lehtinen) Corliss. He is survived by his present wife Linda (Schmidt) Corliss, brother Lawrence Corliss (Sandy), and sister Sydney (Corliss) Suter. His children are Shawn Corliss (Georgette), Donna Corliss Cebollero (Jaime), Kimberly Corliss Morris (Jeffrey), and Stephen Corliss. Grandchildren include Audrey McEuen (Sam), Eriyln Corliss, David Corliss (Ashley), Abigail Corliss, Nicholas Cebollero, Leah Morris, and Sierra Morris. Three great-grandchildren include Gregory McEuen, Peter McEuen and Alice McEuen. He is also survived by his stepchildren Sal DevVito, Tony DeVito (Lisa) and Gerald “JJ” Naico (Lena). Warren was a Navy brat who lived in many interesting places growing up, including Alaska and Hawaii. After graduating from Anchorage High School in Anchorage, Alaska, he followed in his father’s steps and joined the Navy, spending nine years in service to his country. After being honorably discharged in 1966, he moved to Stuart, FL. During the end of his years in the Navy, he met and married his first wife, Jill, in Florida and raised his family mostly in West Palm Beach. Warren was saved on June 14, 1968 when he walked down the aisle at a small Baptist church and gave his life to Christ. As he told the story, when he walked out of that church “the sky was bluer and the grass was greener”. His young family had a tradition of celebrating this date every year as his “Passover” with a meal of lamb and the taking of communion. He was a longtime member at Trinity Temple in Palm Springs, FL, eventually serving as a deacon and elder. Lifelong friendships were born in this congregation. Anyone who met Warren could see the evidence of his love for his Lord and Savior Jesus Christ. Warren enjoyed sharing Jesus with everyone, everywhere and at any time. He met his current wife Linda in church (Trinity Temple). They were married on June 25, 2011. Services are set for Tuesday, April 5, 2022 from 6:00-7:00 PM , followed by a time of fellowship in the back of the church. Trinity Temple, 2930 Lark Road, Palm Springs, FL 33406

Warren George Corliss, Jr. passed away on March 31, 2022 in his home in Greenacres, FL. He was preceded in death by his wife Jill (Lehtinen) Corliss. He is survived by his present wife Linda (Schmidt) Corliss, brother Lawrence Corliss (Sandy),... View Obituary & Service Information

The family of Warren George Corliss created this Life Tributes page to make it easy to share your memories.

Send flowers to the Corliss family.